There are 10,000 possible security alarm code combinations (using the numbers 9-0).

So, theoretically, if a thief wanted to try to guess your 4-digit code they’d have a 1 in 10,000 chance of getting it right. Those are pretty good odds for you—and terrible for thieves.

But, if you select the most popular 4-digit code, a thief’s chances of guessing it correctly increase to 1 in 10 (or 10%).

“Well, duh,” you might be thinking. “But no one actually uses that code for their security system.”

Actually, one analysis of 3.4 million 4-digit codes found that 1234 was the most popular code, by far. In fact it accounted for over 10% of the 3.4 millions codes that were analyzed.

That means without knowing anything about their target, a thief could try the code 1234 on 100 homes and get into 10 to 11 of them—without the security system even going off!

So the message should be clear: Don’t use 1234 as your security system code.

But that’s not the only alarm code you should avoid. The analysis by Data Genetics also lists other popular codes to avoid.

A year that has meaning to you (like a birthday or anniversary)
Every single 4-digit code starting with 19 was in the top fifth of dataset. That likely means lots of people are using their birth year or anniversary. That makes it easy for the thief to guess—especially since that info can be found on Facebook and other social media sites. 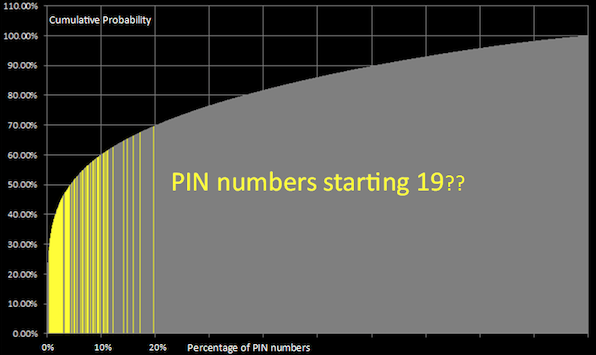 And we already know that burglars are using Facebook to find their victims. 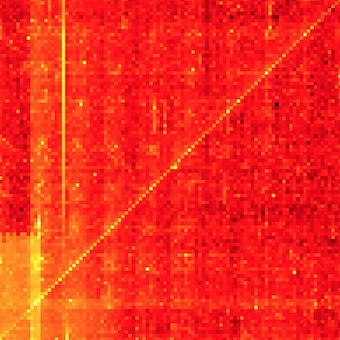 Your birthday (the month and day) or another important date
Again, your birthday is easily found on Facebook and other social media sites. But many people still use it as their alarm code. Just take a look at lower left of the heatmap above. Lots of 4-digit codes starting with 01 through 12 and ending with 01 through 31. 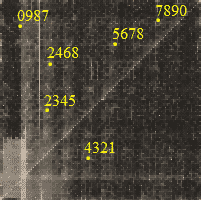 Heatmap above with some of the sequential codes highlighted. Image source: DataGenetics

How to choose a secure alarm code

Unfortunately, we can’t give you a formula for selecting a secure alarm code. As soon as we did, thieves would adjust their tactics to target those codes. Instead, all we can tell you is give you some guidelines.

Don’t use something just because it’s “easy to remember”
Most easy-to-remember codes are also easy for thieves to guess. This includes all of the examples above as well as things like:

Pick as random a number as you can
This is the corollary to the point above. If your alarm code is random to you, there’s no way for a thief to somehow guess it from learning about your personal information. And you’ll use the alarm code so much it will quickly become second nature.

Don’t reuse a PIN from somewhere else (e.g. debit card/ATM)
Security breaches happen, even to financial institutions. So it’s best to use a different code for each security need (voicemail, debit card, security system, etc.).

How to reset your security system alarm code

The process to change your code is different depending on what security panel you have. Find your manual here.